She happened to die the same week as Maggie Thatcher and Lilli Pulitzer, which meant there was not enough focus on the passing of Annette Funicello.

Attention must be paid.

I think it was around 1953 when my father brought home our first television set, at which time, my siblings and I began what was to be a life-long relationship with the wonderful world of Disney.

Programming was limited back then, to be sure. There was a circus show (whose star was a blonde lady in a red sequined leotard). There was a show with a trio of amusing sock puppets and another with a duo of not so-amusing clowns, and then there was the one that was the real life-changer: The Mickey Mouse Club.

For one thing, it was an empowering show for us because it was kid-driven. Yes, there were a couple of old guys present on set, but they wore mouse ears so they didn’t read as true grown-ups. The Club kids were so cute, talented and well-behaved, they were a cluster of shiny-clean role models.

Just as when, in the sixties, my siblings and I each chose their favorite Beatle, we each had our Mouseketeer. Mine was Annette.

I thought she was kind of perfect, pretty in an unusual way, sweet, almost shy, and those mouse ears sat so neatly on her black, tightly coiled hair. I wished she could be my babysitter instead of Nancy who had extremely sweaty armpits and limited us to one Oreo apiece.

Although we had a black and white TV, I was pretty sure that the skirt Annette (and her female ‘Keteer peers) wore was green. It had a thousand pleats, which gave it a swingy grace and capacity for swirl unlike any garment I’d ever seen.

At night in my prayers, I requested a favor in exchange for good behavior. I asked God if He would send me, by express mail if possible, a replica of Annette’s skirt. (I longed for a trip to Disneyland too, but I didn’t want to push it.)

While I understood that God was fairly busy, I was disappointed that my request was apparently in low position on his to-do list. While I waited in vain for the mailman to bring me my package from heaven, some stores began to stock “duplicates” of the dream skirt, but they were not the same, not even close—no swing, inadequate swirl. If Annette’s was the Cadillac, the knock-off was the Edsel.

I learned to accept life without Annette’s skirt (not to mention her babysitting services). Eventually she traded in her Mouseketeer wardrobe for beach movie bikinis (much to the delight of Frankie Avalon) and I switched obsessions to the Beatles. (Paul, to be specific.) And, as they used to sing at the close of each “Club” episode, “Now it’s time to say goodbye…” to Annette Funicello, but she’ll always be a prominent figure in my childhood memory bank.

P.S. My longing to go to Disneyland was only satisfied when I was over thirty, when I went with two of my siblings who were also still chasing the Disneyland dream. The place did not live up to our impossibly high expectations, but a Polaroid from our visit shows my brother and sister wearing traffic cones on their heads, a sure sign were having fun, or at least a lot of tequila. 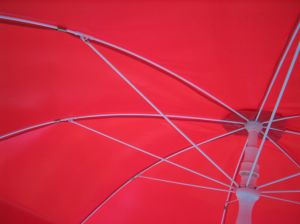